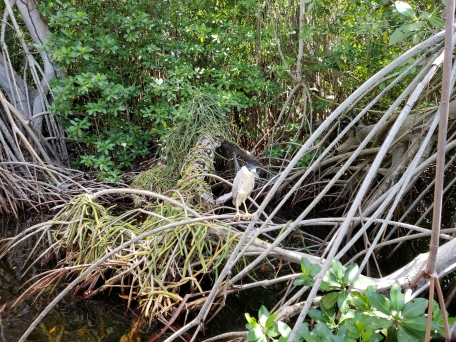 Wetlands Day is intended to increase awareness on the importance of wetlands and promote their conservation. Throughout the world, wetlands are being damaged by human activities or destroyed to facilitate built development. Yet they are critical to our survival, ranking high on the list of the Earth’s most valuable ecosystems.

Wetlands help alleviate floods by temporarily storing flood waters after extreme rainfall events, they can be used for recreational purposes (e.g., the Caroni Swamp in Trinidad and Tobago), they control erosion, sequester carbon, and mitigate hurricane damage by protecting coasts from storm surges. The Caribbean is particularly vulnerable to hurricane events, as was emphasized in 2017, when within a two-week period the region was hit by two Category 5 hurricanes (Irma and Maria). According to Dr. Rahanna Juman, in an article published by the Institute of Marine Affairs, it has been estimated that changes in annual hurricane frequency and intensity could lead to annual losses to the region of as much as USD 446 million by 2080 arising from interruptions to business especially in the tourism sector.

In the face of rising environmental threats and public health concerns, it is fitting that the theme of this year’s World Wetlands Day is ‘Wetlands and Water’ as wetlands purify water. Wetlands are called “kidneys of the landscape” due to their ability to operate as a natural filter for the earth by absorbing pesticides and chemicals which through human activity, makes their way into the water. For instance, there is a high use of nitrogen-based fertilizer in farming and livestock rearing; the effluent from livestock and nitrogen runoff from agriculture fields make their way into drains as well as rivers and eventually contaminates groundwater supply in the form of nitrates. This can have negative effects on human health as it has been linked to cancer. It can also exacerbate climate change as nitrous oxide is a dangerous greenhouse gas, as much as 300 times more effective at trapping heat in the atmosphere than carbon dioxide.

Contaminants discharged into the coastal zone in Caribbean countries may be a significant hazard to marine life including coral reefs, potentially impacting ecosystem services and livelihoods associated with the blue economy as well as posing public health threats. One of the priority areas of the GEF-IWEco Project is toxic chemical substances. Currently, there is a lack of data on the concentrations of chemical contaminants in the Caribbean coastal zone. To fill this information gap, the Caribbean Public Health Agency’s Environmental Health and Sustainable Development Department (CARPHA EHSD) in Saint Lucia has partnered with Trent University in Canada, to pilot the collection of environmental data using passive samplers.

In October 2020, 15 Polar Organic Chemical Integrated Samplers (POCIS) were deployed in the Soufriere Bay to monitor for selected pesticides, pharmaceuticals, and personal care products. The samplers have since been retrieved and are currently undergoing analysis by Trent University. Wetlands are a vital component of healthy watersheds and this data will contribute to the overall objectives of the GEF-IWEco project in terms of identifying integrated watershed management strategies that are needed to protect coastal areas. It may also contribute to the larger dialogue on wetlands conservation as well as the role they play in filtering chemical contaminants and improving water quality.

As we celebrate World Wetlands Day let us recognize the valuable role our wetlands play in reducing the impacts of climate change and improving water quality. We must protect our wetlands so that they can continue to protect us.