Fisherman in Nevis where the preservation of coral reefs is an aim of the IWECo St Kitts and Nevis National sub-project, Nevis, February 2019. Photo: IWEco

Addressing Impacts of Acute Land Degradation in the College Street Ghaut in St Kitts and Quarries and Sand Mining Hotspots on Nevis.

On St. Kitts, sandy loams which are highly erodible once exposed, dominate the island. The conversion of lands out of sugarcane and subsequent lack of soil conservation measures,has resulted in acute erosion in some places. This is particularly evident at the College Street Ghaut which runs through the Federation’s capital, Basseterre. The College Street Ghaut watershed covers 662 hectares; the main watercourse originates north of the Olivees Mountain and runs past the west of the airport runway, through to the city of Basseterre, discharging to the sea. 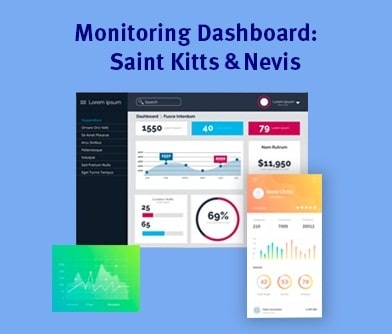 The banks of the Ghaut have seen significant encroachment associated with agriculture and settlements along with the indiscriminate disposal of solid and liquid (grey waters) waste. The removal of protective vegetation has resulted in increased erosion rates from the river banks and across the upper reaches of the watershed. The result has been sedimentation of the river channel, heightening the risk of flooding and loss to life and property particularly within the lower watershed reaches that includes the city of Basseterre. Major flood events linked to land degradation and chronic sedimentation have been a frequent occurrence, with the last major event in summer 2013 causing an estimated US$120,000 in damages. With the encroachment of development also comes the increase in land-based pollution. Pollutant contributors include those associated with agriculture from fertilizer and other chemical applications, livestock rearing and effluent discharge, and from settlement areas in the form of grey and black water. Outfalls create a public health risk along the Bay Road, Basseterre coastline. There is also evidence of increasing sedimentation of the marine environment in the Basseterre Bay and some impacts to the coral reefs, which are prime recreational dive sites and thus foreign revenue earners.

On Nevis the issue of land degradation associated with poor quarry management practices needs to be dealt with urgently. Currently, quarries are the primary sources of sedimentation in the streams (ghauts), resulting in offshore reef degradation and the destruction of mangrove swamps. There are several seasonally active, privately operated quarries on the island, some which are on land leased from Government. Most of these operations do not implement measures to stabilize displaced overburden and mitigate the flushing of sediment into ghauts and into the marine environment during heavy rains. In addition to these quarries, numerous beaches are exploited for sand. High sedimentation rates have been occurring on Nevis reefs with potential impacts to the coastal fishery and dive operations. Prevailing coastal currents take silt from the quarries around to marine ecosystems on the west coast, resulting in the death of corals from siltation.

On St. Kitts the project interventions will focus on installation of soil conservation measures within the College Street Ghaut. These measures will include vetiver contour rows; piloting of onsite grey water treatment systems; a feasibility study for centralized collection and treatment of wastewater in the target area; installation of new and maintenance of existing gabion baskets inside the ghaut; stabilization and regular maintenance of existing retaining walls and bridges; and clearing of culverts, drains, outfalls and roads of debris and sediment along the ghaut.

On Nevis on-site investments will include stabilization of ghauts and water harvesting systems to reduce quarry run-off into the ocean; replanting of mangroves and other coastal plant species as a step towards restoration of coastal wetlands; coral reef restoration at New River, Indian Castle, Dogwood and Long Haul; and restoration and reforestation of one non-productive quarry area located at Hicks Estate and a vulnerable area downstream of active quarries at Coconut Walk.

For both islands the project will provide support for long-term sustainability and replication through policy, regulatory support, exchange of best practices.

The project will also contribute to forest cover rehabilitation over degraded areas and foster conservation of existing forests to maintain the integrity of ecosystem services over the College Street Ghaut watershed in St Kitts and across the eastern landscapes in Nevis where the majority of land degradation associated with quarrying is occurring. Further downstream, impacted mangroves and wetlands will also be restored. Through on-site land and forest cover investments at various sites within the target watershed areas on both islands, it is expected that an estimated 13,169.5 equivalent tonnes of CO2 over the life of the project, or an average of 2,633.9 tCO2eqv/year, will be sequestered.

The St. Kitts & Nevis Project was officially launched on 26 February 2019 and is being implemented over a three-year period. The Launch was attended by representatives of various departments of government on both St. Kitts and Nevis, as well as NGOs, statutory bodies, civil society, private sector and the media. The Project’s first and second Steering Committee meetings took place in March and November 2019, at which time the Annual Work Plans for the first and second year of project implementation were endorsed.

Diagnostic assessments of the College St. Ghaut and of targeted quarries, coral reefs and wetlands in Nevis were completed by mid-2019 and target interventions started. Land degradation control works in the College Street Ghaut are ongoing. Reforestation and rehabilitation efforts at Coconut Walk, Hicks Estate and Nelson Spring Wetland in Nevis began in May 2020. In addition, preliminary work in coral reef surveying and restoration on the eastern coast of Nevis is ongoing. 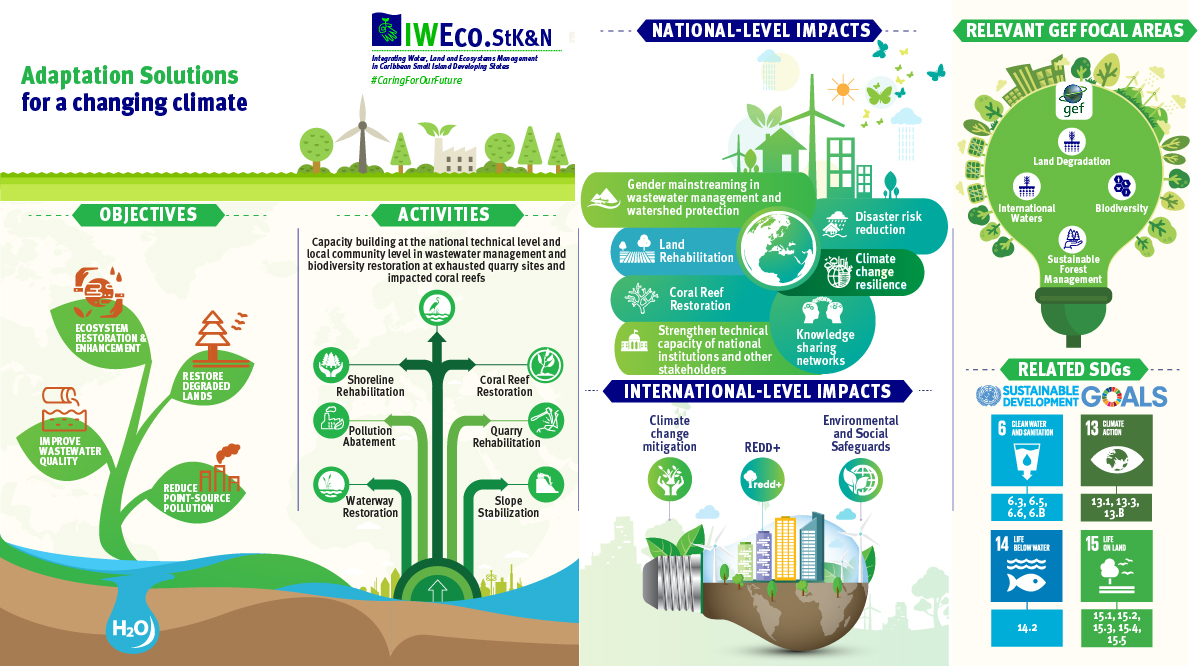 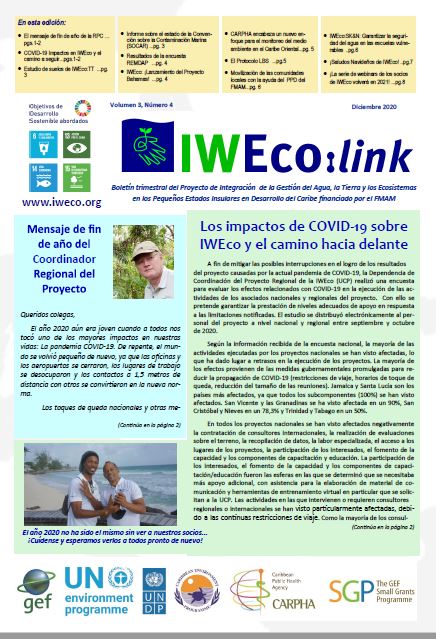 IWEco's newsletter 'IWEco:Link' is produced quarterly by the Project Coordination Unit and describes Project activities and achievements. This is the Spanish version of the December 2020 issue. 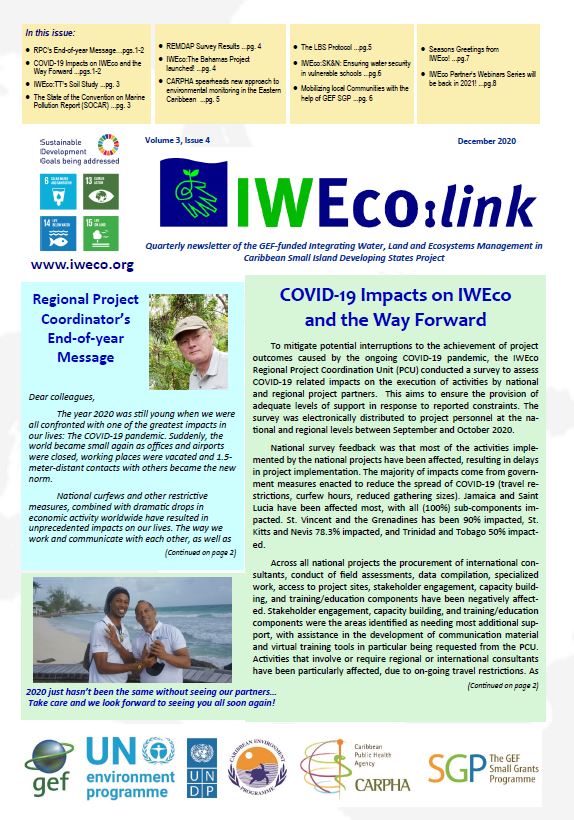 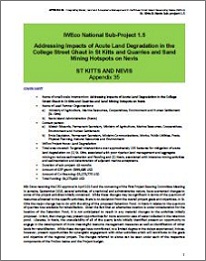 Natural Capital Accounting in the Caribbean

This presentation, part of UNEP GEF IWEco's Partners' Webinar series, and given on 19th January

The GEF-IWEco St. Kitts and Nevis national sub-Project was launched on Tuesday, February 26th, 2019 at the Ocean Terrace Inn in Basseterre, St. Kitts.